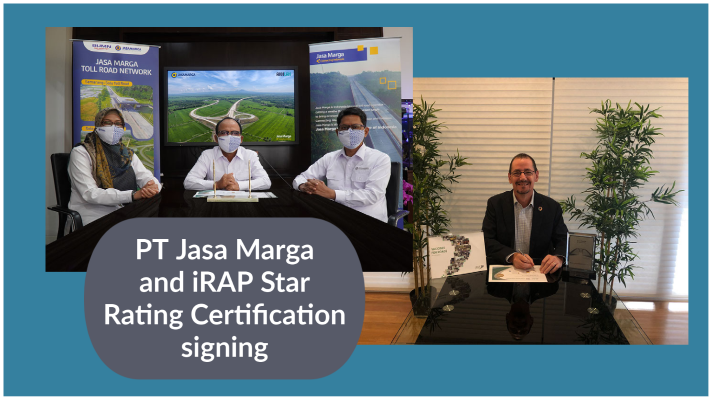 In a virtual signing event this week, PT Jasa Marga (Persero) Tbk has been awarded a 3-Star or Better iRAP Certification for its Jagorawi and Cipularang Toll Roads in Indonesia and the company also achieved a milestone of three employees with iRAP accreditation.

Jasa Marga aims to support the achievement of United Nation’s Sustainable Development Goal 3.6 and ‘halve the number of global deaths and injuries from road traffic accidents’, as part of Indonesia’s National Masterplan for Road Safety.

Provided with webinar and in-house training by iRAP in 2019, Jasa Marga (Persero) in association with University of Indonesia and Bandung Institute of Technology completed the first road assessment of toll roads in the country. Utilizing Hawkeye 2000, owned by Jasa Marga’s Subsidary, Jasamarga Tollroad Maintenance, the survey was conducted at Jagorawi, Cipularang, and Padaleunyi Toll Road in both directions.

Besides star rating the toll roads, by the end of the project in 2020, Jasa Marga has completed the official training and accreditation for iRAP assessments and gained an iRAP Certificate of Accreditation for three employees.

Speaking from the virtual signing event, the President Director of Jasa Marga, Subakti Syukur, MM, confirmed his delight to achieve a technical standard that takes into account road safety in line with UN Global Road Safety Performance Targets 3 and 4.

“These are our company milestones to ensure safer roads based on the 3-star or better iRAP Global Standard for Road Infrastructure Safety.

The President Director added, “Further, we hope this will be the commencement of establishing InaRAP, an iRAP partnership in Indonesia”.

iRAP CEO Rob McInerney said, “We congratulate PT Jasa Marga on their leadership and commitment to achieving a 3-star or better safety rating on their toll road network.  Their achievement will deliver safety benefits to their customers and is a significant contribution to meeting the United Nations Global Road Safety Performance Targets for 3-star or better roads worldwide.

“Their commitment and work towards establishing a locally owned and led InaRAP road assessment programme will see their success translate into safer roads for all Indonesians as part of the Second Decade of Action for Road Safety,” he said.

According to iRAP’s Vaccines for Roads Big Data Tool, 87 lives are lost every day on roads in Indonesia, 749 people suffer limb fractures and 155 suffer brain injuries or are paralysed.

Achieving UN Targets 3 and 4 in Indonesia stands to save more than 10,700 lives per year with an economic benefit of USD$160 billion and $17 benefit for every $1 invested.   Private sector leadership and investment like that of PT Jasa Marga will be a key part of unlocking those benefits.

Information on iRAP KPIs for integration in road safety strategies, can be found here. 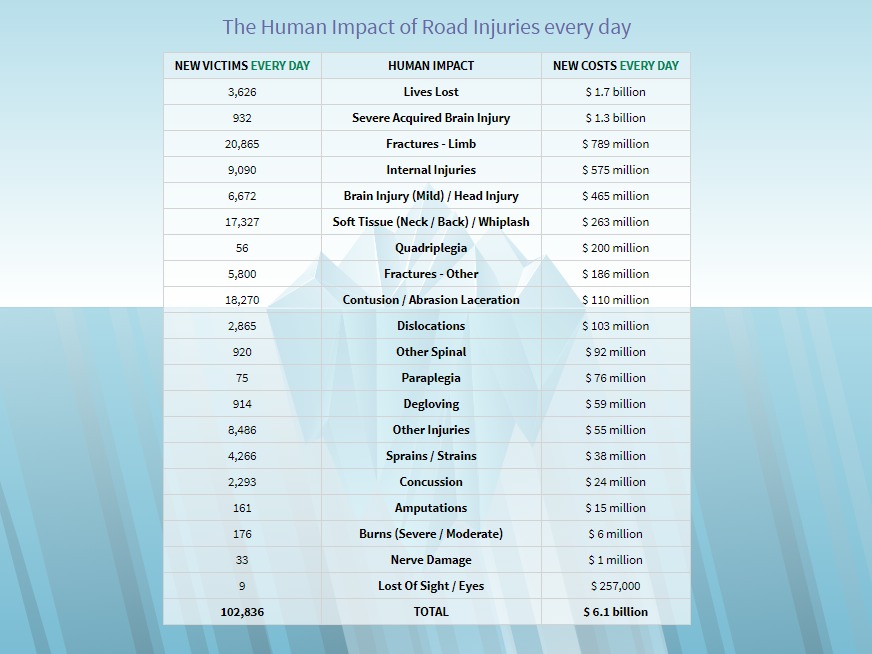 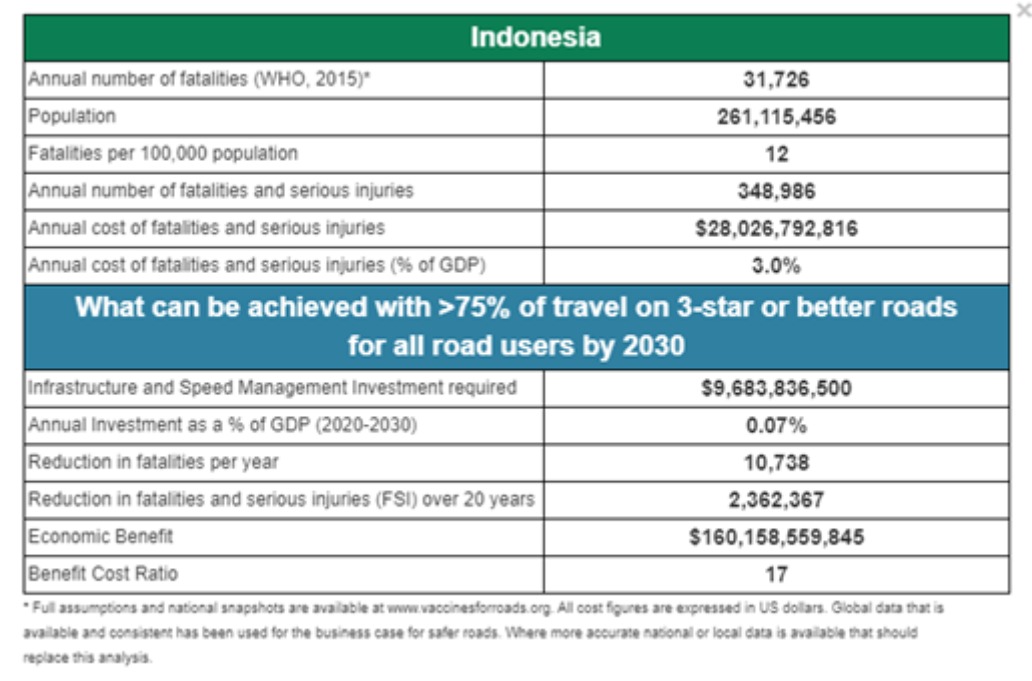 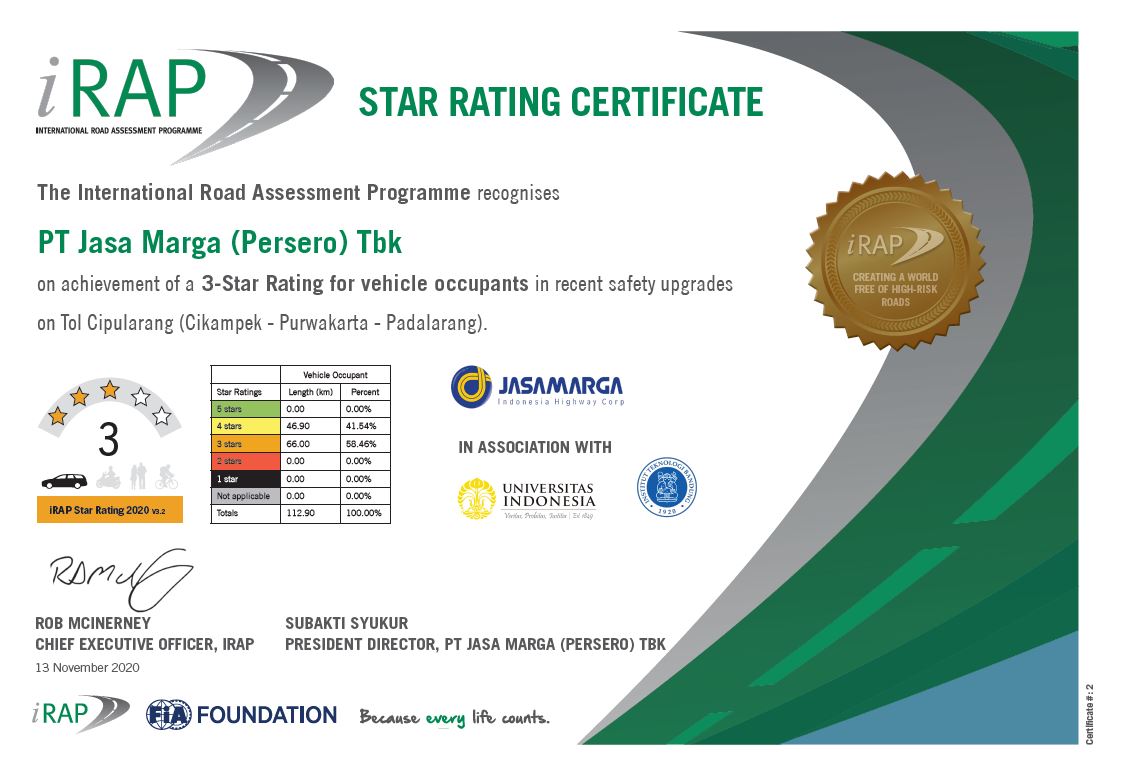 About Jasa Marga
Jasa Marga, operated under the regulation of Indonesia Toll Road Authority, Ministry of Public Works and Housing, has been investing efforts to double its business, reflected in the total length of toll roads that the company successfully operates which has reached 1,191 km at the end of 2020. Entering the age of 43, Jasa Marga has been expanding the business owning a 1,527 km concession of toll road through 3 Regions and 21 Subsidiaries. It remains the biggest toll road operator with 55% market share of all operated toll road in Indonesia. Jasa Marga continues to innovate based on technology, specifically for their operation and maintenance services as a form of transformation to adapt in the new era. Jasa Marga commits to achieve and maintain a safe and green toll road network. Jagorawi Toll Road is the first toll road in Indonesia. Operation first commenced in 1978 with a total length of 50 km. The Jagorawi Toll Road connects 2 provinces, Jakarta and West Java. Jagorawi Toll Road also links to another toll road in the Special Capital Region of Jakarta –  Jakarta Intra Urban Tollways, Jakarta Outer Ring Road (JORR) and JORR West 2. Meanwhile, Jasa Marga has been operating Padaleunyi Toll Road since 1991 with the total length of 43 km. It connects two areas of West Java, Padalarang and Cileunyi. In 2005, the Cipularang Toll Road was built and linked directly with Padaleunyi Toll Road and Jakarta-Cikampek Toll Road which connects Jakarta to Bandung (West Java). Cipularang and Padaleunyi Toll Roads are constructed in a mountainous area which akes the typical alignment of the road with gradient and curvature.

About the International Road Assessment Programme (iRAP)
The International Road Assessment Programme (iRAP) is a registered charity dedicated to saving lives through safer roads, established to support the UN Decade of Action for Road Safety 2011-2020. iRAP works in partnership with governments, development banks, mobility clubs, research organisations and road safety NGOs to: inspect high-risk roads and develop Star Ratings and Safer Roads Investment Plans; provide training, technology and support that will build and sustain national, regional and local capability and to track road safety performance so that funding agencies can assess the benefits of their investments. iRAP and its partners are saving lives in over 100 countries of the world.