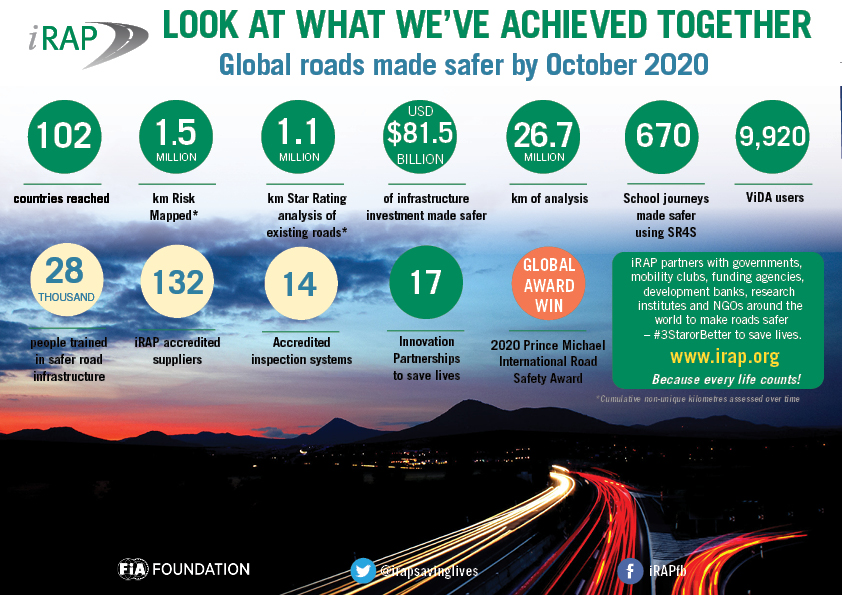 iRAP’s latest global metrics highlight outstanding growth in the charity’s Training and Accreditation programme having reached almost 28,000 people in 137 countries during the past 6 years; 132 people and 14 inspection systems have been accredited since 2018 .

The figures, drawn biannually, reveal iRAP and its partners reach across 102 countries with over 1 million kilometres of assessments performed world-wide and USD$81.5 billion of road infrastructure investment made safer.

iRAP CEO Rob McInerney said we’re so proud of the work of every one of our partners in 102 countries, as recently recognised with a 2020 Prince Michael International Road Safety Award.

“Since its refresh at the end of 2018, the Training and Accreditation Programme has been a gamechanger for helping us support partners wherever they are, with whatever capacity they have, regardless of income status or experience,” Rob said.

“We are fortunate to work closely with leading donors and development organisations such as the FIA Foundation, Global Road Safety Facility who have helped us make this training possible for so many people around the world.”

“In the last year alone, 4,770 practitioners from 119 countries have undertaken iRAP training delivered in 15 languages across 75 training courses and events.

“With courses delivered for free or at minimal cost in self-paced on-line format, the programme is helping countries set and achieve star rating targets and eliminate high-risk roads,” Rob said.

Each year, iRAP reports to its major donor the FIA Foundation on the work of the charity and its partners in saving lives on safer roads across the globe. More than 15,000 partners in government, mobility clubs, development banks, NGOs and world-leading research institutions are supported by iRAP’s tools, training and programmes.

Additional highlights of this 6-month reporting period include: