Improved designs for the corridor connecting Gandhinagar, the Gujarat state capital, with Ahmedabad airport shows fatalities and serious injuries (FSIs) would reduce by up to 59 per cent over 20 years with upgrade, highlighting the life-saving value of safety analysis at the design phase.

74 people have lost their lives in road crashes on the corridor between 2010 and 2017. The route carries heavy traffic at high speed mixing cars, motorcycles and heavy vehicles. There are four major roundabouts, a high share of two-wheelers and significant presence of crossing pedestrians at several locations.

Baseline iRAP Star Ratings were conducted for the existing road and Star Ratings of the proposed design. Additional treatments were suggested by IndiaRAP team for inclusion in the design to ensure the road achieved a 3-star or better safety ratings for all road users. These included the redesign and quality improvement of intersections, improvement of access roads, speed calming measures, signalised pedestrian crossing facilities, pedestrian sidewalks and bus bays. These treatments were included in the road design and the revised version of the design achieved 3-star or better for all road users.

A comparison of Star Rating results for the baseline and design versions showed that the design greatly increases the 3-star road length for vehicle occupants, motorcyclists and pedestrians. 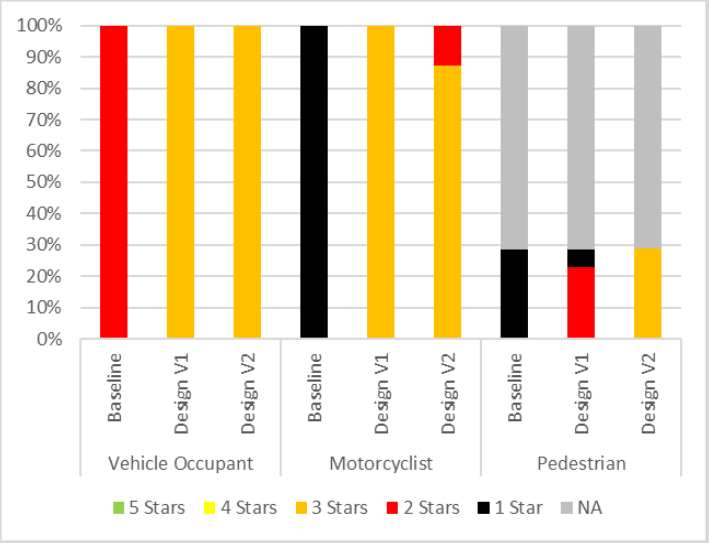 The iRAP analysis quantified the potential reduction of fatalities and serious injuries that could be expected over the 20-year road life based on the existing road and implementation of the two upgrade designs.

It is estimated that implementation of proposed road design version-2 would reduce the number of fatalities and serious injuries on the corridor by 1,196 or 59 per cent over a period of 20 years.

* If vehicle operating speeds do not increase beyond 60-70km/h

Capital works have not yet occurred on the corridor but the improved designs and additional iRAP recommendations stand ready to ensure a 3-star or better journey for all road users.

Safety assessment at the design phase of road planning enables the maximization of lives and injuries saved before construction begins. For more information on iRAP’s free Star Rating for Designs and how to access training, click here.