Bosnia and Herzegovina’s economic integration of the Western Balkans and the rest of Europe is taking an important step forward thanks to an EBRD USD$600 million loan for the construction of the Corridor Vc Motorway.

The development of Corridor Vc is a strategic priority for Bosnia and Herzegovina.  The project will improve connectivity between BiH main cities and neighbouring countries and is comprised of three phases of work being completed between 2018 and 2030. As part of a greater Pan-European transport corridor, the upgrades will enhance transport services and reduce traffic on local roads with positive impacts on local air quality, noise and road safety.

Once completed, the corridor will serve as an extension of the Trans-European Transport Networks to the core network of the Western Balkans. More than 50 per cent of the population of Bosnia and Herzegovina lives within the 30-kilometre-long corridor, an area which contributes more than 60 per cent to the country’s GDP.

EuroRAP assessments have informed the safety of the corridor and investment.

According to iRAP’s Big Data tool, the number of estimated fatalities in Bosnia and Herzegovina  per year is 6,072 (WHO 2015).  Achieving >75% of travel on 3-star or better roads for all road users in Bosnia and Herzegovina  by 2030 stands to save 185 lives each year and reduce fatalities and serious injuries over 20 years by 40,596 with an economic benefit of almost USD$3.75 billion. 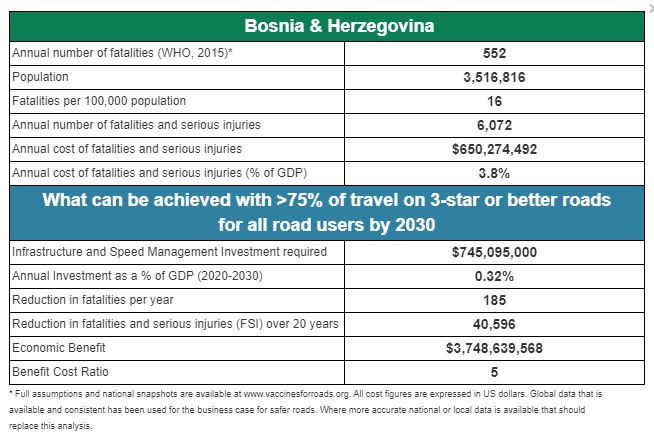